Lead, Copper, and Other Drinking Water Contaminants in
Schools and Early Learning Programs in Washington and Oregon.

Drinking water quality is a high priority in the Pacific Northwest. The states of Washington and Oregon have regulations
that apply to drinking water in schools and early learning providers. RCP Environmental is familiar with the rules and
sampling requirements in both states. Let us help you protect the health and safety of your students, staff and visitors.

WAC 170-300- 0235 Safe Water Sources requires early
learning providers such as daycare and pre-schools to
have drinking water used for preparing food or infant
formula, or cooking tested for lead and copper content.
This testing must be done prior to licensing and at least
once every six years afterwards.

K – 12 Schools
WAC 170-300- 0235(3) Initial Monitoring Schedule for Lead
Will require School officials to conduct initial monitoring by
sampling at least half of the plumbing fixtures regularly
used for drinking or cooking in elementary schools or used
by preschool children in K-12 schools within one year after
the rule goes in to effect.

OAR 581-022- 0223 Healthy and Safe Schools Plan
Each school district and public charter school must
develop a Healthy and Safe Schools Plan for all buildings
owned or leased by the school district or public charter
school where students and staff are present on a regular
basis. At a minimum, the plan must include a plan to test for and
reduce exposure to lead in water used for drinking or food
preparation. An Oregon Health Authority Accredited
laboratory must be used to analyze water samples
collected from schools

The WELL Building Standard contains provisions for safe and clean drinking water throughout the design, construction, and maintenance of a building. It is a third party evidence based, science backed rating system to measure the performance of your building systems. RCP Environmental is familiar with the rigorous sampling methods and protocols required to collect the data you need to help you achieve and maintain WELL Building certification for your building.

RCP Environmental accounts for each of these drinking water elements to help your project earn WELL
certification. 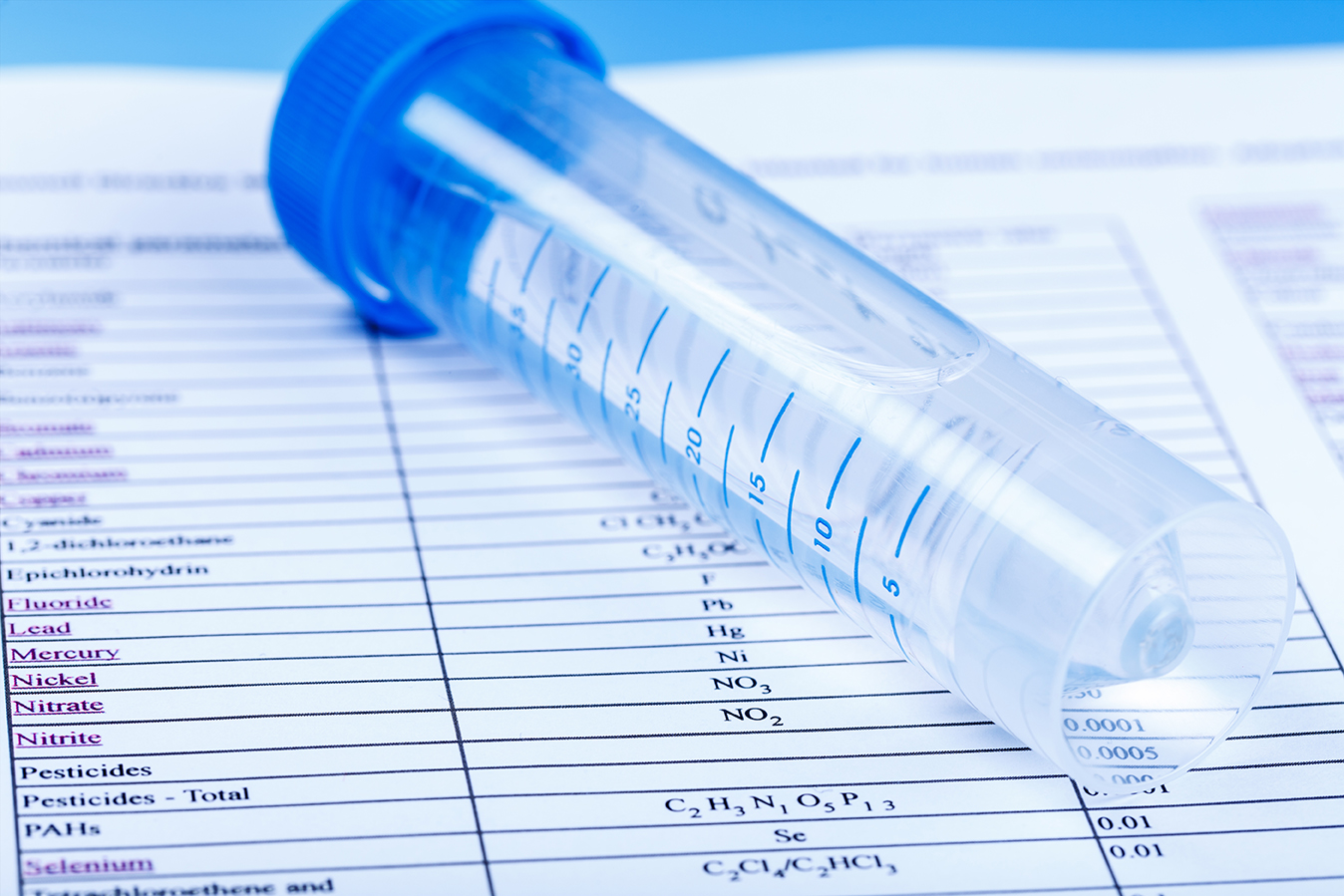 Sediment
a. Turbidity
Microorganisms
a. Total coliforms (including E.
coli)

RCP Environmental is an independent third party environmental consulting firm. We specialize in collecting samples in the built environment for laboratory analysis. Our staff has over 25 years of experience gathering and interpreting analytical data to provide our clients with reliable information.

What You Should Know about Lead in Drinking Water

Health Effects of Lead
Lead is a toxic metal that is harmful to human health. Lead has no known value to the human body. The human body cannot tell the difference between lead and calcium, which is a mineral that strengthens the bones. Like calcium, lead remains in the bloodstream and body organs, muscle, or brain for a few months. What is not excreted is absorbed into the bones, where it can collect for a lifetime.

Young children, those 6 years and younger, are at particular risk for lead exposure because they have frequent hand-to- mouth activity and absorb lead more easily than do adults. Children’s nervous systems are still undergoing development and thus are more susceptible to the effects of toxic agents. Lead is also harmful to the developing fetuses of pregnant women. No safe blood lead level in children has been determined. Lead can affect almost every organ and system in your body. The most sensitive is the central nervous system (brain), particularly in children. Lead also damages kidneys and the reproductive system. The effects are the same whether it is breathed or swallowed. Low blood levels of lead (those below 10 µg/dL) have been associated with reduced IQ, attention span, learning disabilities, poor classroom performance, hyperactivity, behavioral problems,impaired growth, and hearing loss. Very high lead level (blood lead levels above 70 µg/dL) can cause severe neurological problems such as coma, convulsions, and even death. The only method to determine a child’s lead level is for them to have a blood test done by a health provider.

Sources of Lead
The U.S. government has taken steps over the past several decades to dramatically reduce new sources of lead in the environment: by banning the manufacture and sale of leaded paint; by phasing out lead additives in gasoline, and by encouraging the phase- out of lead seams in food cans; by banning the sale of pipes and plumbing for drinking water that are not “lead-free”; and by banning lead-lined water coolers, among other activities. More recently, the government has begun to address persistent sources of lead in the environment. For example, programs have been instituted to minimize the hazards posed by lead paint covering millions of homes across the United States, more stringent air control standards are being applied to industries emitting lead, and more stringent regulations are in place to control lead in drinking water. How Lead Gets into Drinking

Lead can get into drinking water in two ways:

(1) By being present in the source water, such as coming from contaminated runoff or water pollution. At the Source Most sources of drinking water have no lead or very low levels of lead (i.e., under 5 parts per billion). However, lead is a naturally occurring metal and in some instances can get into well water. Lead can enter surface waters (waters from rivers, lakes, or streams) through direct or indirect discharges from industrial or municipal wastewater treatment plants or when lead in the air settles into water or onto city streets and eventually, via rainwater, flows into storm sewers, or waterways, which may enter the water supply. Lead from these sources can be easily removed by existing treatment plant technologies.

(2) Through an interaction between the water and plumbing materials containing lead, such as through corrosion. Most lead gets into drinking water after the water leaves the local well or treatment plant and comes into contact with plumbing materials containing lead. These include lead pipe and lead solder (commonly used until 1986) as well as faucets, valves, and other components made of brass. The physical/chemical interaction that occurs between the water and plumbing is referred to as corrosion. The extent to which corrosion occurs contributes to the amount of lead that can be released into the drinking water. The critical issue is that even though your public water supplier may deliver water that meets all federal and state public health standards for lead, you may end up with too much lead in your drinking water because of the plumbing in your facility. Testing  the drinking water for your schools is important because children spend a significant portion of their day in these facilities and are likely to consume water while they are there.

RCP Environmental is familiar with EPA recommendations and guidelines regarding when, where and how to sample for lead in drinking water. We can work with you to develop a customized sampling strategy that will provide the useful objective analytical information you can use to make informed decisions about your physical facilities.